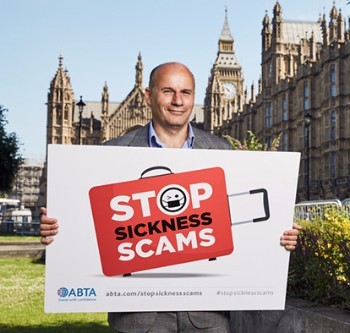 ABTA has today launched it's “Stop Sickness Scams” campaign which calls for urgent action on fake holiday sickness claims, which are costing the wider travel industry tens of millions of pounds.

The campaign calls on the new Government and Justice Minister, David Lidington MP, to urgently crack down on fake holiday sickness claims which are being encouraged by the aggressive marketing of Claims Management Companies, and warns holidaymakers about the consequences of making a false claim.

Mark Tanzer, ABTA Chief Executive said "This issue affects the whole industry. Even if you are not directly affected, fake claims are threatening to increase holiday prices and limit choice and availability for honest British holidaymakers. Hoteliers in Spain and Turkey have already said they may have to stop offering all-inclusive packages to British tourists because of the devastating financial impact fake claims are having. The reputation of British tourists abroad is also being damaged."

Since 2013, there has been a more than 500% increase in the number of compensation claims for holiday sickness with tens of thousands of claims in the past year alone. Yet, during the same period, reported sickness levels in resorts have remained stable and the problem is only associated with UK holidaymakers.