The 2014 UniCredit PGA Professional Championship of Europe is to be held for a fourth time at the stunning Pravets Golf & Spa Resort, Bulgaria, from 15 - 18 October. The staging of this European Club Professionals' flagship event comes at the end of one the busiest golf season Pravets has had to date. Pravets is quickly becoming one of the favourite "event venues" for major European golf competitions and by the end of this season, Pravets will have hosted three of the European Golf Association's most significant tournaments - the Mid-Amateur Championships, the Senior Men’s Team Championships hosted by the
READ MORE
Golf
Spotlight on Bulgaria as Volvo World Match Play begins Bulgaria’s first full European Tour event, the 2013 Volvo World Match Play Championship, takes place this weekend at the breathtaking Thracian Cliffs Course. The elite tournament, which is celebrating its 50th year, gathers 24 of the world's best players to compete for this prestigious title via a qualification process designed to attract the highest quality from the international world of golf. Taking part this year will be players like Nicolas Colsaerts who has qualified as the Defending Champion, Shane Lowry who qualified by winning the 2012 Portugal Masters and Rory McIlroy, Justin Rose, Louis Oosthuizen and Peter Hanson who
READ MORE
Golf
PGA Golf Tournament comes to Bulgaria in 2013 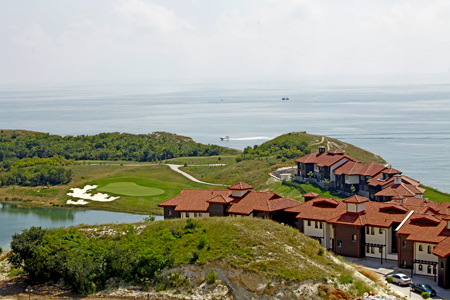