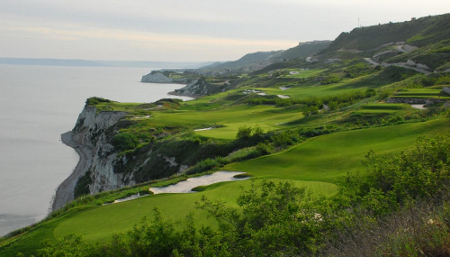 Bulgaria’s first full European Tour event, the 2013 Volvo World Match Play Championship, takes place this weekend at the breathtaking Thracian Cliffs Course. The elite tournament, which is celebrating its 50th year, gathers 24 of the world's best players to compete for this prestigious title via a qualification process designed to attract the highest quality from the international world of golf. Taking part this year will be players like Nicolas Colsaerts who has qualified as the Defending Champion, Shane Lowry who qualified by winning the 2012 Portugal Masters and Rory McIlroy, Justin Rose, Louis Oosthuizen and Peter Hanson who qualified as the leading four players on the final 2012 Race to Dubai Rankings. It was also announced that the prize fund for the 2013 Championship has increased to €3,000,000 (€250,000 more than 2012) with the eventual winner taking home a €800,000 first prize giving the players even more to play for this year.

Defending Champion Nicolas Colsaerts commented, “Winning the Volvo World Match Play Championship last year was my biggest individual achievement to date and I have no doubt that my success in such a prestigious match play tournament gave Captain Olazábal added confidence in me when he came to choose me as one of his Captain's Picks for the 2012 Ryder Cup. The list of past champions of the Volvo World Match Play Championship reads like a who's who of golf and I am very proud to see my name added to such an illustrious list which includes so many golfing greats including, Gary Player, Greg Norman, Sir Nick Faldo and the greatest match player of all-time, the late Seve Ballesteros.”

Colsaerts added, “I am very excited to be defending my title at this new venue. As historic as the Match Play Championship is, I think it is pretty neat that it is still making history as the first full European tournament to be held in Bulgaria and I look forward to experiencing all Bulgaria has to offer.”

Bulgariaâ€Ÿs Minister of Physical Education and Sport, Mr Svilen Neykov, expressed his support for the Volvo World Match Play Championship, “I am delighted to welcome our partners, Volvo, IMG and the European Tour here today. There are many wonderful courses and destinations around the world that would wish to have been selected and I take enormous pride that Bulgaria was chosen to host this prestigious international tournament. For a Championship with such a rich heritage to choose our country to host the 50th edition is very flattering and we are looking forward to welcoming many of the world's best golfers to Bulgaria.”

Mr Svilen Neykov continued, “We have worked hard to grow golf in our country and the extensive media coverage this Championship will deliver will give us a wonderful opportunity to showcase our credentials as a golfing destination all around the world.”

Per Ericsson, President of Volvo Event Management commented, “At Volvo, we take great pride in being innovative, original and forward thinking. This goes for all areas, from inventing the safety belt to being the first western brand to engage with golf in China. Now, we are the first to bring a full European Tour event to Bulgaria. Not only does Thracian Cliffs provide us with a wonderful stage for this great tournament but, vitally, it works for us on a business level as Eastern Europe is a very important business area for us. We are delighted to be working with the Bulgarian Government and the Bulgarian Golf Association and we are very proud to still be delivering ground-breaking innovations as we look forward to marking our 130th professional golf tournament in Bulgaria.”

The Championship, which will generate worldwide media coverage, with approximately 1,600 hours of golf broadcast to half a billion households, has evolved considerably since moving from Wentworth in 2009, successfully securing a world-class field by qualification on merit, increasing the field to 24 players and revising the format. The qualified players are divided into eight groups of three players to be played out on Thursday and Friday with 16 players progressing to Saturdayâ€Ÿs knock-out stage with the semi-finals and final played on Sunday.

The last three editions of the Volvo World Match Play Championships were held at Finca Cortesín in Spain and this move to the much-lauded Gary Player designed signature course marks the first time a full European Tour event will be played in Bulgaria. Framed by rugged coastal cliffs and the vast blue of the Black Sea, which can be viewed from each and every hole, Thracian Cliffs is arguably one of the most dramatic golf courses on earth. Gary Player once commented, "You will not find a golf course like this anywhere else on the planet." Underlining the unique features of this new venue, the Thracian Cliffs has also been called the "Pebble Beach of Europe".

Or book your own trip to play at Europe's best up and coming golf destination by visiting our golfing holidays selection.