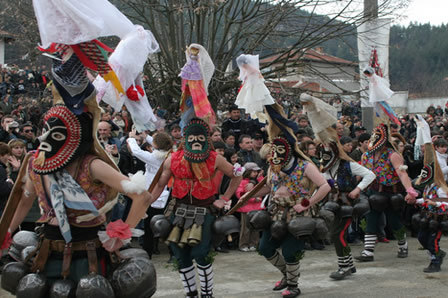 If you are travelling to Bulgaria during the first few months of the year, you have this amazing opportunity to take part in one of the most spectacular spring traditions in the country called 'the Kukeri ritual'.

The Kukeri is a traditional Bulgarian ritual of Thracian origins, but you can expect to find similar ones in near by countries such as Romania, Serbia, Italy and even Spain.

This fun ritual is performed by the locals and anyone who wishes to take part between Christmas and Lent and by costumed men, who walk around and perform fun dance routines that are meant to scare away the evil spirits of the local towns, as well as to offer a good harvest, great health, fertility, and most importantly happiness.

The costumes have been described as pieces of art as it takes a lot of effort and time to create these especially the masks. These costumes cover most of the body and the masks are usually made of wood and represent different animals. Large bells are usually attached to the men's belts for more character.