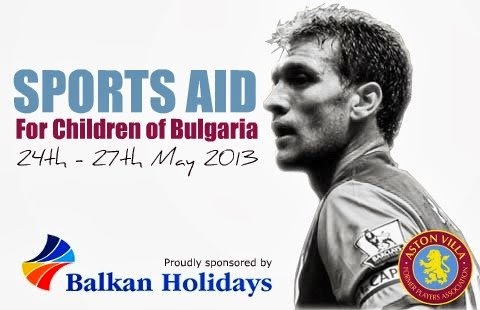 This weekend an Aston Villa Old Stars Xl will be taking on a Bulgarian Legends Xl in Sofia to recognise the contribution of Aston Villa club captain and former Bulgarian captain and international Stiliyan Petrov, who was diagnosed with acute leukaemia last year.

The travelling party of over 100 officials and guests from the UK, will be staying at the beautiful Pravets Golf & Spa Resort, only 40 minutes from Sofia for the duration of the event and will include a two day fundraising Golf event on the Pravets Golf Course as part of the activities.

The football match will take place on Sunday, 26th May at the National Stadium and will be televised live on national TV in Bulgaria. Amongst the stars of the Bulgarian team players will include Hristo Stoichkov, former Prime Minister Boyko Borissov and members of the Bulgarian 1994 squad that reached the semi-final of the World Cup. Stiliyan Petrov himself has confirmed his attendance if well enough to travel.

The Aston Villa team will be managed by former Villa star and Arsenal manager Bruce Rioch and the squad will include former players such as Stefan Postma, Mark Draper, Lee Hendrie, Mark Kinsella, Tony Daley and Alan Wright.

Neil Rioch, Chief Executive, Aston Villa Former Players Association said: “When the Aston Villa PFA was approached in October 2012 inviting a group of former players to visit Bulgaria to initially participate in a golf tournament and promote golf tourism in Bulgaria it seemed obvious to develop this further given the natural links between Aston Villa and Bulgaria by the way of Stiliyan Petrov. It was the Aston Villa PFA’s decision to make this a charity-led tour and we are thrilled with the level of support we have received in the UK and in Bulgaria.”

The Bulgarian Ambassador to the UK, His Excellency Konstantin Dimitrov added: “This noble initiative has enjoyed the full support from all relevant Bulgarian institutions including Government ministries and some serious Bulgarian sponsors such as Actavis and Pravets Golf & Spa Resort. It’s tremendous recognition for the strong affection Bulgarian people hold for the former captain of the Bulgarian national team Stiliyan Petrov. Aston Villa FPA’s strong commitment to the idea of giving something back to Stiliyan’s country made this dream possible”.

“We are delighted to be involved with this event. Balkan Holidays has been operating Summer and Winter sports holidays to Bulgaria for 48 years. It is a great opportunity to showcase our golf holidays programme as well as raising money for such a good cause,” said Rupert Diggins, Sales & Marketing Manager Balkan Holidays.