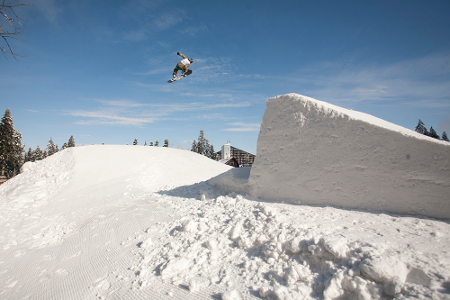 On February 16th, the Bulgarian resort of Borovets hosted a unique snowboard race - The DC BIG SPIN. It took place in one of the resort's terrain parks - Borosport Snow Park and was the first of it's kind ever in Bulgaria. The race is a DC's "trade mark"  whereby the participants are rated based on the variety and the performance quality of the spinning tricks each participant has performed which gives the race its name.

The DC BIG SPIN was open for participation to men and women over the age of 16 years. To qualify for the finals, contestants had to perform two tricks with degrees of difficulty and achieve a total rotation of 900 degrees or above. The winner was the one who achieved the highest result in rotations.

The winner's prize was BGN 1000 (approx £440) which went to Dimitar Chokoev. An additional prize was awarded to the Most Stylish Rider - a DC snowboard. The recipient in this category was Georgi Georgiev, selected by the Wildberries girls.