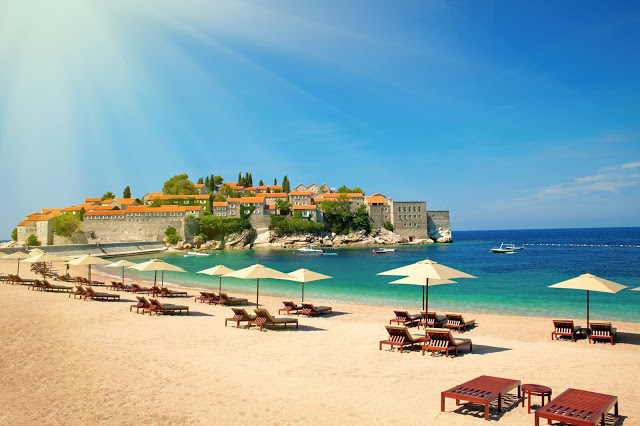 For some, a summer holiday means one thing only: a beautiful beach lapped with warm water under a clear blue sky. And why not - it's not too much to hope that your longed-for break is a hot and sunny one.

While many celebs of the Mediterranean are go-to beach destinations, the Balkans is increasingly popular with those after a slightly different type of seaside escape, where your Sterling will stretch that much further and the weather is simply delightful in summer*.

Bulgaria
Did you know that Bulgaria has a bustling beach scene that’s well-equipped, maturing fast and a real hit throughout summer?

While the capital, Sofia, and historic Plovdiv - a European Capital of Culture for 2019, no less - pull in city-breakers and the mountainous interior is a hit with both nature lovers and adventurers, the Black Sea resorts are sometimes overlooked by UK holidaymakers. This is perhaps because its 378 km-long stretch of coast along the western edge of the Black Sea remains relatively off-radar.

What’s more, Bulgaria consistently ranks as one of the most affordable holiday destinations, ensuring your local beers and cup of reviving coffee can be purchased guilt free, while your holiday budget goes quite a bit further.

When it comes to the weather, Bulgaria’s Black Sea coast promises warm and sunny days from May to October, with temperatures peaking in July at around 26°C on average. Generally speaking, temperatures across the resorts are marginally warmer in the south than in the north, but not significantly enough to put you off holidaying in the northern Varna region, for example. You’re less likely to see any rainfall along the Black Sea when compared with the Adriatic, although it could be a tiny touch cloudier.

In the water, the Black Sea experiences similar temperatures to the Adriatic Sea at the height of summer, although it’s a bit cooler in the early months. This is because the Black Sea gets much colder than the Adriatic in winter.

These are very picky comparisons, though, as the likes of Sunny Beach - no misnomer - and Golden Sands are wonderful summer options, especially if you’re hoping to make your pound go that bit further in a place full of friendly people, stunning landscapes and every seaside amenity you could wish for.

Croatia
When it comes to beach holidays in the Balkans, Croatia is, without a doubt, the big cheese, grandaddy, the head honcho. It’s considered the place to go in the region with the promise of warm, crystal clear water, plenty of sunshine and lots to do for those who so desire it.

And there really is something for everyone here, be it in the quaint capital, Zagreb, the waterfall-laden national parks, vine-rich wine lands to the south or the variety of incredible beaches and ways to engage with the natural surroundings of its rugged and rocky coastline.

Steal a glance at a map of Croatia and you can see why it’s so connected to its coast. The wisps of thousands of islands that extend from Istria in the north, down through Central Dalmatia to the so-called Dubrovnik Riviera beg to be discovered – and, of course, the freshest seafood is readily available at every stop. Many dream of boat-tripping – be it on a day trip or longer – around the isles, coves, bays and lagoons that make up its western sea-border.

When it comes to the weather in Croatia along the coast, there’s surprisingly little difference between daytime temperatures in the north at, say, Pula in Istria compared with further south (such as Split or Dubrovnik).

For example, in July and August, 28°C is the average daytime temperature all the way down the coast, with sea temperatures fairly consistent between 24°C and 25°C. From the middle of August onwards, the warmth begins to recede but is still evenly distributed across the various beach destinations.

There’s a marginal shift in sunshine hours - around one hour less on average in the north. However, with 10 hours of sunshine in Pula and 11 hours in Split in July, you’re still looking at deliciously long, sunny days.

Did you know? It’s easy to be put off when you discover that a place has a pebbly or stony beach, however, there are benefits. Aside from not getting sand everywhere, the water at pebbly beaches is often much clearer as sediment isn't as readily churned up. Just remember to pack a pair of water shoes for your feet!

Slovenia
Slovenia is fast becoming known for its compact cultural capital, Ljubanjana, monastery-dotted lakes and densely-forested landscapes. It’s not, however, always front of mind when considering a beach holiday; understandable, when you consider that its coastline doesn’t quite measure 50 km.

However, this is also what makes resorts such as Portoroz, with its blend of old town charm, glam hotels and an abundance of amenities, a real find for beach lovers. This thriving resort, tucked behind the border with Croatia on the Istrian Peninsula in the northeast corner of the Adriatic, is little-known, making it an excellent alternative.

Although Portoroz is located further north than the likes of Dubrovnik and Budva, the weather is very similar. Daytime temperatures are virtually the same, but Portoroz sees slightly less sunshine – we’re only talking eight to nine hours per day versus nine to 10. There’s also a slight chance of seeing more thunderstorms across the northern Adriatic, however these usually sweep on by quickly.

Interestingly, the sea temperatures vary very little when compared with the southern beach destinations. This is largely down to the fact that the sea is shallower in Portoroz, and being so enclosed in its bay at the tip of the Adriatic, it has the chance to warm up nicely under the summer sun.

Overall, the weather in Portoroz is warm and sunny in summer, and ultimately at its very best from June to August.

Montenegro
Small but mighty Montenegro has plenty to shout about when it comes its beaches. There’s a real mix on offer along this beautiful Balkan’s coast with the standard selection of pebbly and sandy-under-foot options to choose from.

Montenegro’s coast may be longer than, say, its northern sibling Slovenia but it’s still not extensive at around 293 km, roughly 73 km of which is dedicated to beaches for all to enjoy.

Four popular beach destinations, with accommodation and activities for every budget, include bustling Budva with its old city walls and lively bars, laid back Petrovac and its perfect promenade, exclusive and oh-so-scenic Sveti Stefan and well-equipped Becici, boasting a Blue Flag beach and oodles of water sports.

When it comes to the weather in Montenegro, if you’re looking for glorious sunshine, these beaches tempt in summer. Conditions are just starting to warm up by May, which sees longer, sunnier days and a steady rise in average temperatures from 20°C to 24°C by June. These continue to climb through July and August when things are truly Mediterranean, before starting to cool down by September and, more dramatically, into October.

Curiously, you can see that the sea temperature stays warmer for longer than the air temperature; this is down to the fact that the sea retains heat well, with residual warmth from the previous months stored, cooling at a slower rate. It makes for pleasant swimming conditions at the end of the summer when air temperatures are a touch cooler but the sea is as warm - almost as warm - as it the month before.

Top tip: although both the Adriatic and the Black Sea are lovely and warm during the peak summer months – June to August – if you’re planning a beach holiday to the Balkans in May, September or October, you might want to consider booking a hotel with a heated pool, especially if you’re travelling with young children or simply feel the cold!
*The term ‘summer’ relates to the period from May to October.
Data and content contributed by Weather2Travel.com.